Most of it is, in fact, “fake news” — conjecture and unverifiable gossip exchanged over “el Feisbuk,” which is what people here in the Rio Grande Valley call the social network. Instead of snapshots and emojis, it now disseminates warnings. People are frightened, and frightened people repeat things that frighten them more:

Stay at home tomorrow. Immigration and Customs Enforcement is conducting raids in the kitchens.

Don’t send your kids to school on Wednesday. The border patrol is looking for kids with no papers.

Don’t drive down 802 on Fridays anymore.

There’s a checkpoint at the grocery store. They arrested 100 people last night at 10. 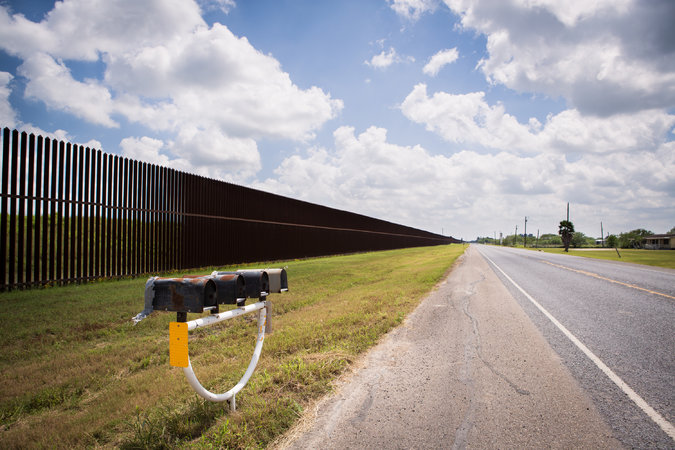 {The current border fence between the United States and Mexico runs along the road directly across from a residential area in Brownsville. CreditDaniel Borris for The New York Times}

You can’t drive much farther south in Texas than Brownsville, a city separated from its Mexican neighbor by an iron fence, like an exclusive country club or drug dealer’s hacienda. It’s a border town, and one that has been suspiciously quiet while its future is bandied about in Washington by a president who equates “making America great again” to “getting the Mexicans out.”

Much of the Rio Grande Valley abuts the fence, which stretches some 650 miles and was built in 2006 for $7 billion. The fence has done little to deter smuggling. Drug cartels, being crafty criminals, get around it in any number of ways: tunnels, light aircraft, homemade submarines, even T-shirt cannons fired over the fence.

Smugglers of humans have adapted as well, using similar techniques (minus the T-shirt cannons). The main effect of making it harder to get across the border has been to create a greater need for coyotes — people, many of whom have ties to the cartels, who will help you cross for pay. This means even more trauma for migrants, including robbery, rape, ransoming and murder.

Many of those who make it across end up staying here, on the border, because there’s another checkpoint an hour and a half north, at Sarita.

There are two border towns in every border town. There’s the one I’ve recently discovered, which is deeply involved in local schools, has air conditioning and Wi-Fi, and drives comfortably appointed tanks that pass as cars. It has Snapchat for the kids who do their homework, all the cable in the world and so, so much food.

In this town, every Sunday is reason enough for barbecue, guacamole and limes picked fresh from the tree, squeezed right into your beer.

Then there is the other border town, where I was raised back in the 1970s. It lives directly behind the first. It avoids eye contact. It cooks in the kitchens and manicures your St. Augustine grass and is paid — not much — by the hour. Those people — not your criminals or rapists or “bad hombres” — are waiting and waiting to take a swipe at that golden lie of the “American dream” they endured thousands of treacherous miles worthy of a Tolkien novel to reach.

And while they wait, they work. Any work. They struggle through tertiary economies — reselling clothes, furniture or appliances at roadside stands, making tamales or tortillas in garages, setting up hair salons in living rooms (men’s cuts $7), cleaning houses and offices and schools, mowing, cutting, picking. They always work. The work is compulsory.

Before I moved back to Brownsville in January, I’d spent 23 years in Seattle. Throughout last year’s election, I watched the news with the eyes of a West Coast liberal. As the veneer of social decorum paled and then vanished, we sat around being entertained by progressive news shows. Even after the confounding results of the election, we felt reassured and validated in our perception of the world, our ability to call out hypocrisy in institutions and governments, lawyers and hedge fund managers.

Then I came home. Now I see, up close, the impact that election could have on people I know who are very much in danger of losing everything.