[This reminds me of the little non-profit in Baltimore that I’m clearly becoming obsessed with, aka Thread. What happens when we open our doors to “others”? When we are integrated, our lives entwined, it seems like it is easier to care for other humans and build humane policies. However, this article documents a Canadian program that, like most things to our north, is very white. From snow to savior-complex, white is the new black. Though the end of the article ponders what the white Canadians might gain or need from these relationships, what a truly equitable network might offer, it is a long road to get there.]

How Canadian hockey moms, poker buddies and neighbors are adopting Syrians, a family at a time.

TORONTO — One frigid day in February, Kerry McLorg drove to an airport hotel here to pick up a family of Syrian refugees. She was cautious by nature, with a job poring over insurance data, but she had never even spoken to the people who were about to move into her basement.

“I don’t know if they even know we exist,” she said.

At the hotel, Abdullah Mohammad’s room phone rang, and an interpreter told him to go downstairs. His children’s only belongings were in pink plastic bags, and the family’s documents lay in a white paper bag printed with a Canadian flag. His sponsors had come, he was told. He had no idea what that meant.

Across Canada, ordinary citizens, distressed by news reports of drowning children and the shunning of desperate migrants, are intervening in one of the world’s most pressing problems. Their country allows them a rare power and responsibility: They can band together in small groups and personally resettle — essentially adopt — a refugee family. In Toronto alone, hockey moms, dog-walking friends, book club members, poker buddies and lawyers have formed circles to take in Syrian families. The Canadian government says sponsors officially number in the thousands, but the groups have many more extended members.

When Ms. McLorg walked into the hotel lobby to meet Mr. Mohammad and his wife, Eman, she had a letter to explain how sponsorship worked: For one year, Ms. McLorg and her group would provide financial and practical support, from subsidizing food and rent to supplying clothes to helping them learn English and find work. She and her partners had already raised more than 40,000 Canadian dollars (about $30,700), selected an apartment, talked to the local school and found a nearby mosque.

Ms. McLorg, the mother of two teenagers, made her way through the crowded lobby, a kind of purgatory for newly arrived Syrians. Another member of the group clutched a welcome sign she had written in Arabic but then realized she could not tell if the words faced up or down. When the Mohammads appeared, Ms. McLorg asked their permission to shake hands and took in the people standing before her, no longer just names on a form. Mr. Mohammad looked older than his 35 years. His wife was unreadable, wearing a flowing niqab that obscured her face except for a narrow slot for her eyes. Their four children, all under 10, wore donated parkas with the tags still on. 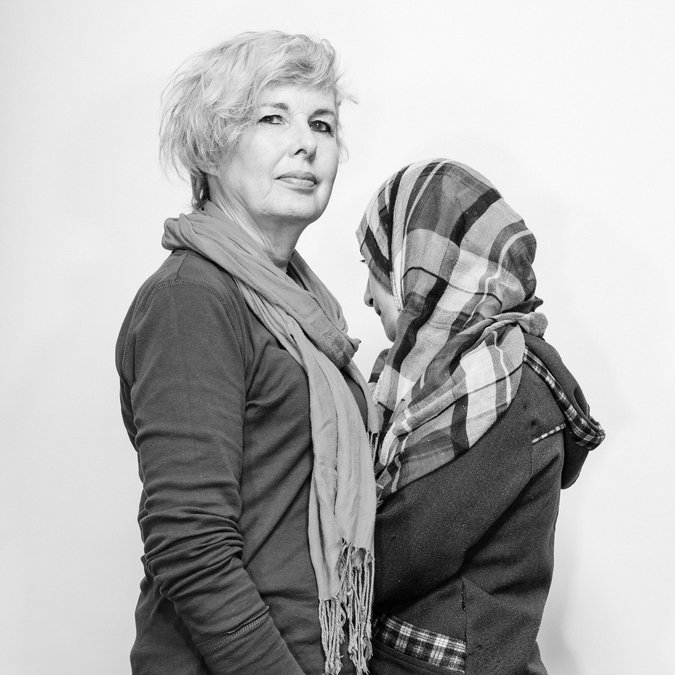 {Susan Stewart, an artist, is a sponsor of Eman Mohammad and her family. CreditDamon Winter/The New York Times}

For the Mohammads, who had been in Canada less than 48 hours, the signals were even harder to read. In Syria, Abdullah had worked in his family’s grocery stores and Eman had been a nurse, but after three years of barely hanging on in Jordan, they were not used to being wanted or welcomed. “You mean we’re leaving the hotel?” Abdullah asked. To himself, he was wondering, “What do these people want in return?”

Much of the world is reacting to the refugee crisis — 21 million displaced from their countries, nearly five million of them Syrian — with hesitation or hostility. Greece shipped desperate migrants back to Turkey; Denmarkconfiscated their valuables; and even Germany, which has accepted more than half a million refugees, is struggling with growing resistance to them. Broader anxiety aboutimmigration and borders helped motivate Britons to take the extraordinary step last week of voting to leave the European Union.

In the United States, even before the Orlando massacre spawned new dread about “lone wolf” terrorism, a majority of American governors said they wanted to block Syrian refugees because some could be dangerous. Donald J. Trump, the presumptive Republican presidential nominee, has called fortemporary bans on all Muslims from entering the country and recently warned that Syrian refugees would cause “big problems in the future.” The Obama administration promised to take in 10,000 Syrians by Sept. 30 but has so far admitted about half that many.

Just across the border, however, the Canadian government can barely keep up with the demand to welcome them. Many volunteers felt called to action by the photograph of Alan Kurdi, the Syrian toddler whose body washed up last fall on a Turkish beach. He had only a slight connection to Canada — his aunt lived near Vancouver — but his death caused recrimination so strong it helped elect an idealistic, refugee-friendly prime minister, Justin Trudeau. Continue Reading –>