[Check out where you live. Where I grew up is an island of grey in a sea of orange. Where I teach is a little too small on the map to really discern the details. But the phenomenon certainly applies, with school districts in close proximity that have vastly different per pupil expenditure. This article and its accompanying map remind me of the related article: The Stark Inequality of U.S. Public Schools, Mapped. What would the overlay of these maps look like? Looking forward to the next two installments in this series. Next up: does money matter?]

Why America’s Schools Have A Money Problem

Let’s begin with a choice.

Say there’s a check in the mail. It’s meant to help you run your household. You can use it to keep the lights on, the water running and food on the table. Would you rather that check be for $9,794 or $28,639?

It’s not a trick question. It’s the story of America’s schools in two numbers.

That $9,794 is how much money the Chicago Ridge School District in Illinois spent per child in 2013 (the number has been adjusted by Education Week to account for regional cost differences). It’s well below that year’s national average of $11,841.

Ridge’s two elementary campuses and one middle school sit along Chicago’s southern edge. Roughly two-thirds of its students come from low-income families, and a third are learning English as a second language.

Here, one nurse commutes between three schools, and the two elementary schools share an art teacher and a music teacher. They spend the first half of the year at different schools, then, come January, box up their supplies and swap classrooms.

“We don’t have a lot of the extra things that other districts may have, simply because we can’t afford them,” says Ridge Superintendent Kevin Russell.

One of those other districts sits less than an hour north, in Chicago’s affluent suburbs, nestled into a warren of corporate offices: Rondout School, the only campus in Rondout District 72.

Class sizes in Rondout are small, and every student has an individualized learning plan. Nearly all teachers have a decade of experience and earn, on average, more than $90,000. Kids have at least one daily break for “mindful movement,” and lunch is cooked on-site, including a daily vegetarian option.

Why does Rondout have so much and Ridge so little?

Over the past six months, NPR Ed and 20 of our member station partners set out to explore this basic question.

The simple answer is that many of Rondout’s neighbors are successful businesses. They pay local taxes, and those taxes help pay for local schools. Ridge simply has less to work with — fewer businesses, lower property values.

More broadly: “You’ve got highly segregated rich and poor towns,” says Bruce Baker of Rutgers University, who studies how states pay for their public schools. “[They] raise vastly different amounts of local revenue based on their local bases, and [Illinois] really doesn’t put much effort into counterbalancing that.” 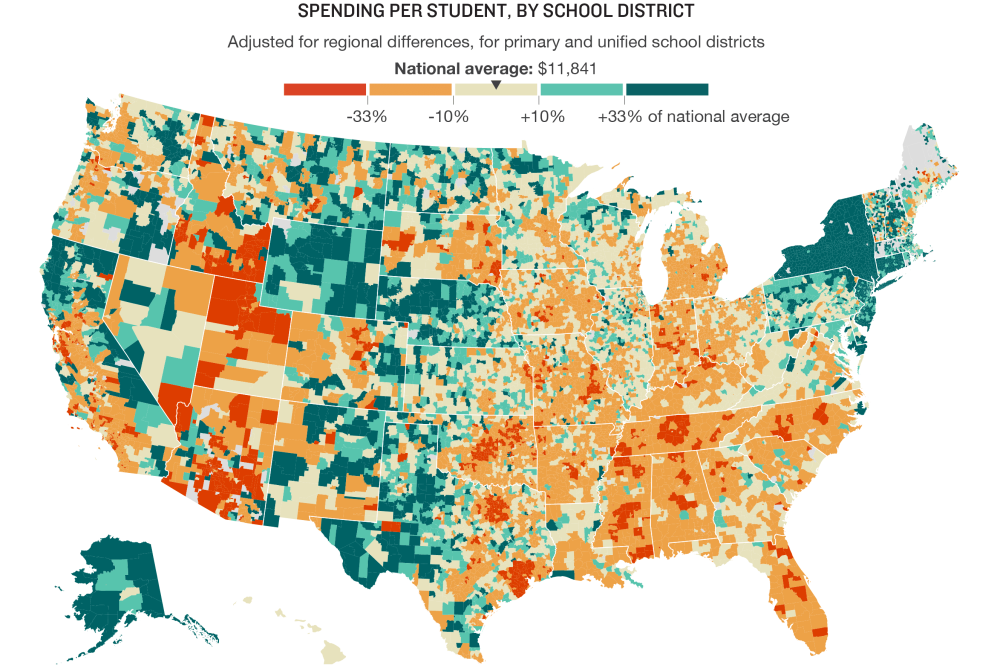 To be fair, Illinois gives more money to Ridge than it does to Rondout. It’s just not nearly enough to level the playing field. Continue Reading –>